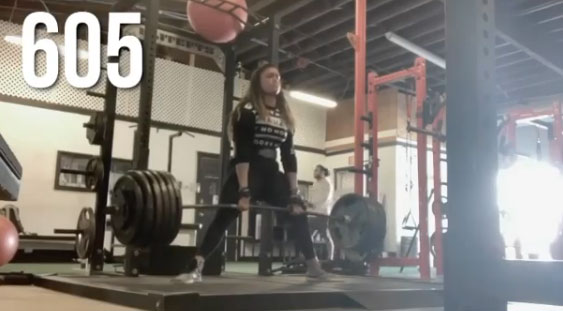 Powerlifter Kheycie Romero is still a rookie, having only competed in six contests to date, but make no mistake — she’s the real deal. Of the six contests she’s been in, she’s won four and placed second in the other two, according to OpenPowerlifting.org.

And she also shows no signs of slowing down. Romero recently uploaded a clip of her completing an unreal 605-pound deadlift. That’s more than three times her bodyweight (at her last contest, she weighed in at 188 pounds).

Romero clearly struggles a little bit, but in the end it’s a clean lift. Check it out here:

Wish you could lift that much? It’ll take a lot of hard work, but Romero’s willing to help you. According to her Instagram profile, she operates an online coaching company called Formulated Strength. The company doesn’t have many followers or reviews, but those who have trained under Romero have sung her praises for helping them improve their form and up their numbers.

Romero also holds a Bachelor’s degree in Statistics from the University of South Florida, according to her Facebook.

In the meantime, we’ll just enjoy some of her best lifts uploaded to Instagram. See some of them below.

Sam Wood says you should always workout your core before glutes

Chris Hemsworth Ends His Week With a Grueling Workout

Fitness and fun at the 2020 Move It Expo – Bundaberg Now

5 sexy-yet-practical swimsuits you can actually exercise in

8 Figures by the Age of 26 with Josh Snow